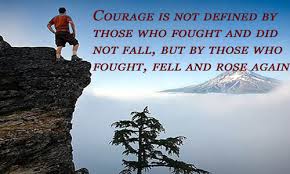 We are in a season full of dreaming and pressing into the dreams God has placed in us.  A God dream is a big dream that only He can help accomplish.  These are lofty and can seem impossible.  They put fear in people and it takes a lot of courage to reach these dreams.  Courage, along with its synonyms, have been widely used by many in western culture today.  There has even been a film named Courageous.  I love this film, and it is Christian based with a very good message.  Songs are being written and sung about us, Christians, being brave and having no fear as sons and daughters of God.

Why would God want us to hear the word “courageous?”

As a good rule of thumb, I use the Bible as my plumb line.  This keeps me in line with His heart.  Anytime I operate in the prophetic gifting or receive prophetic revelation, I use the Bible as my filter.  In the past, I would have just said anything or believed anything that had “Thus saith the Lord…” attached to it.  As I have grown in this journey, I have found by using this filter the prophetic gifting will not be used in an abusive way.  The goal or desired end result of this gift is always love.